AMC’s custom developed fluid solution and technical support enabled the successful completion of a difficult HDD bore, which faced challenging geological formations and where all previous fluids providers and engineering contractors had been unsuccessful.

The project was a difficult HDD bore requiring an existing gas line to be replaced across a cobble creek for Mexico’s state owned petroleum company PEMEX. PEMEX had used multiple contractors for this project without any success. The geological and technical challenges were largely to blame for the increased difficulty of the bore. Highly plastic yellow clay on the front side of the hole down to 40ft depth, abruptly changing to highly unconsolidated cobble sections, left the operation halted at 1,700ft.

AMC’s customer, IS Machines, had spent three months tackling the challenging geological formations, losing tooling including bit and mud motor assembly to the formation and leaving them going in and out of the hole, with the project stalling. During that time they had attempted to use a wide variety of approaches, including bit and mud motor variations along with different mud programs, including MMO (mixed metal oxide muds) and bentonite only slurries in excess of 100sec / qt funnel viscosity. With the project not progressing, IS Machines contract for the project was under increasing pressure.

AMC’s engineers in the USA and Mexico worked together to analyse the job site and fluid properties and develop a customised solution for this unique bore. Their principal focus was to develop a fluid that would keep the hole stable with the highly dense, unconsolidated gravels experienced in the formation.

The solution was a custom designed Low Shear Rate Viscosity (LRSV) fluid that would give exceptional cleaning results without relying on high pump rates and turbulent flow to move cuttings from the borehole. Unlike other LSRV options, this specific formula could be adjusted over time to accommodate the changes in the formation, most notably, the change from very hard, difficult-to-flow cobble to yellow, plastic clays. With a funnel viscosity no higher than 70, the solution proved that a thick fluid isn’t always the best.

Viscous polymer sweeps were also utilized to move some of the larger cuttings out of the hole. AMC PURE VIS™, a product unique to AMC, was applied directly down the drill pipe.

AMC’s mud engineers focused on the entire fluids process to ensure success, providing on-site support and evaluating not only the mud program, but providing advice on mixing techniques and equipment. Poor mixing practices and equipment on the previous unsuccessful attempts had contributed to a fluid that underperformed and could not complete the job. AMC’s engineers provided recommendations on the correct screens and appropriate mixing and solids control equipment, which ensured the fluid system remained in optimal condition for the completion of the project.

IS Machines purchased multiple bits after the first attempt and a complete mud motor and bit assembly replacement on the second attempt, elevating the equipment cost of the first two attempts.

As seen in the graph below, the costs on the third and successful attempt, using AMC’s engineering and fluid solutions, resulted in minimal equipment purchases and mud costs. These costs, which include engineering and screens costs, were approximately half of the combined first two attempts. 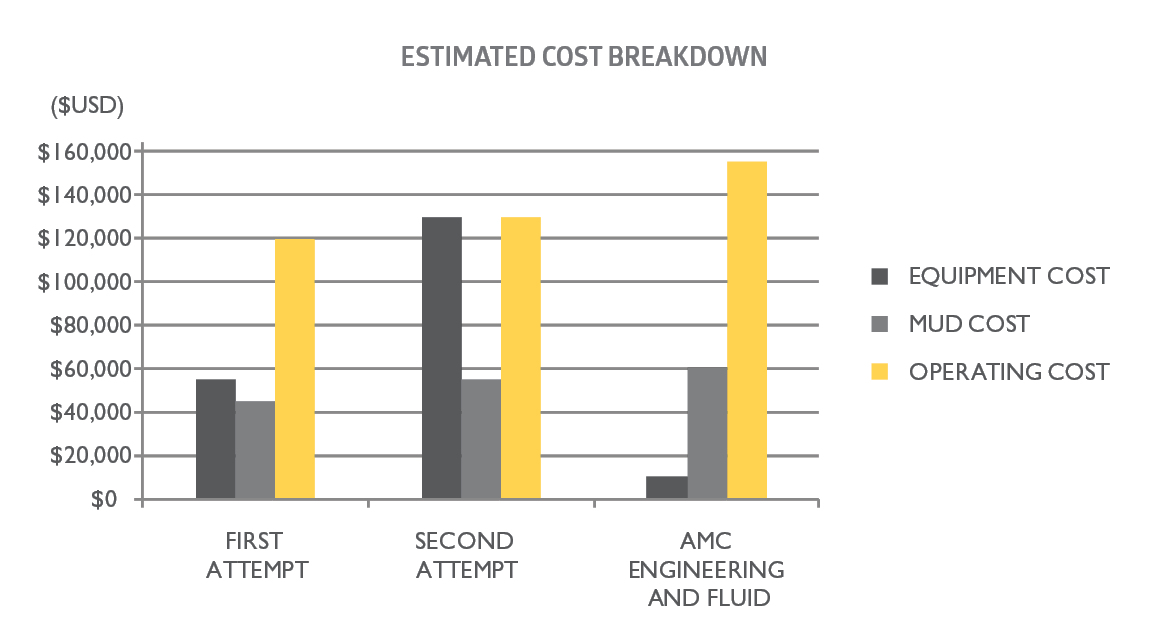 Although this is the universal rule for most mud programs and mud engineers, it couldn’t have been more important for IS Machines on this challenging borehole. Highly dense, unconsolidated gravels made it very difficult to keep the borehole stabilised.

Additionally, this job experienced multiple unexpected periods of downtime caused by torrential rainfall, which in some cases left the job inaccessible for days. Major repairs to equipment caused by the laborious nature of the formation resulted in weeks of lost operating time and coupled with the remote location, an easy fix could often cost vital days.

Using the new AMC LSRV mud program and AMC mud engineer’s support, a nearly flawless pilot and 18” ream was completed, before the gearbox to the bore machine broke down. Initial estimates of a 2 week repair period stretched to 40 days before the rig was able move the pipe in the ground. During this time, there had been no way to circulate or condition the hole, and there had also been heavy rainfall and multiple creek washouts.

IS Machines re-started the 24” ream unsure of the condition of the hole after the extended delay. The ream took off without a problem, drilling 1160m with full flow to the exit pit and full flow to entry side on the last 100 feet.

There is no way I could have hoped to have a better result after being shut down for 40 days. I was already convinced that the AMC mud was doing a good job, it was easy to see with all of the cuttings coming out of the hole, but I didn’t think it could hold the entire job on its shoulders. I cannot thank AMC Minerals enough for their support.

The sound technical guidance of AMC’s mud engineers and the development of an innovative fluid solution specific to the unique challenges of this project, delivered a successful result where multiple fluids providers and engineering services had previously declared the project impossible.

AMC’s LSRV mud solution enabled the borehole to progress, increasing the Rate of Penetration (ROP) and improving production time to complete the project. Despite delays caused by uncontrollable variables including the weather and remote location, the mud program provided exceptional hole stability and hole cleaning properties with production of a highly flowable slurry of dense material.

AMC’s solution also delivered significant cost savings to the contractor. Costs associated with replacing equipment caused by the harsh nature of the formation were virtually eliminated, and mud costs were approximately 50% of the previous two attempts by IS Machines.

AMC utilized an internally developed bidding calculator, specifically designed for Horizontal Directional Drilling, to provide a total estimated cost of the bore. The total estimates were within 5% of the final cost of the drilling fluids and engineering provided, enabling the customer to manage their project budgets accurately.